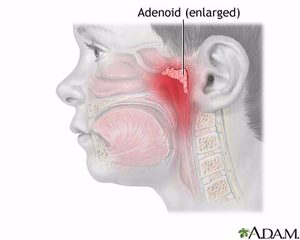 An adenoidectomy is the surgical removal of the adenoids, glands located behind the nose above the roof of the mouth. The function of the adenoids is to help fight ear, nose and throat infections by screening bacteria as they enter the body. At times, however, the adenoids themselves may become chronically infected and require removal; this condition is known as adenoiditis.

The majority of adenoidectomies are performed in children, frequently in combination with tonsillectomies. In such cases, the procedure is called an adenotonsillectomy. The adenoids usually shrink by adolescence, so adults rarely undergo the procedure.

Reasons for an Adenoidectomy

When adenoids become infected and swollen, they may block the nose and make it difficult to breathe. To compensate, patients with adenoiditis frequently breathe through their mouths. Because mouth-breathing may produce its own set of symptoms, including dry mouth, bad breath, cracked lips and nasal congestion, an adenoidectomy may be required. Other problems caused by infected and swollen adenoids that can be corrected by adenoidectomy include:

An adenoidectomy may also help to alleviate persistent snoring and sleep apnea.

While the tonsils can be seen by physical examination, the adenoids cannot. However, diseased adenoids have certain telltale signs, including yellow or white spots near the tonsils or tongue, swollen lymph nodes, or irritated red spots in the mouth, that enable their diagnosis. The adenoids themselves may be seen through the use of a special mirror in the mouth, or through a tube called an endoscope, which is inserted through the nose. Other tests to diagnose problems with the adenoids may include sleep studies or X-rays of the area.

Because an adenoidectomy is performed through the mouth, no incision is necessary and the only cutting involves removal of infected tissue. Sometimes surgeons use techniques other than traditional surgery to remove the adenoids. The two primary methods used in such procedures are electrocautery, which uses electricity to heat and remove the glands, and radiofrequency energy (RFB), which uses unheated radiofrequency energy for the same purpose. Adenoidectomies are normally performed as outpatient procedures under general anesthesia, but patients usually remain in the clinical setting under observation for about five hours to prevent complications.

Patients may experience sore throats or earaches, for up to two weeks after an adenoidectomy, and they may be treated with analgesics. There may also be swelling in the mouth, which causes residual mouth-breathing or snoring. White scabs in the mouth are normal after surgery and should not be picked because they will fall off naturally. It is important for a patient who has undergone an adenoidectomy to maintain hydration after surgery, and to be aware of complications signified by high or persistent fever, nausea and vomiting, headache, stiff neck or difficulty breathing.

Risks of an Adenoidectomy

While an adenoidectomy is a safe procedure, there are risks involved in any surgery. These risks may include:

Post-surgical infection and breathing problems are also possible complications of an adenoidectomy.

After an adenoidectomy most patients experience increased breathing through the nose, fewer sore throats and ear infections.