A goiter is an abnormal enlargement of the thyroid gland, a small gland at the base of the neck, below the Adam's apple, which is part of the endocrine system. The thyroid gland helps the body to use energy and keep warm, and keeps the muscles, the heart and other organs working efficiently.

There are several causes of goiter, some more serious than others. Anyone with a goiter should be examined, diagnosed and monitored by a physician.

Years ago, iodine deficiency was a very common cause of goiter in the United States. Since the body does not produce iodine, iodine must be ingested. Once iodized salt was introduced in this country, iodine deficiency ceased to be a serious problem, although there are still parts of the world in which large parts of the population suffer from this deficiency. Iodine deficiency not only produces goiters but can lead to hypothryroidism, resulting in mental retardation.

Graves' disease is an autoimmune disorder which causes the thyroid gland to produce too much hormone. It is the leading cause of hyperthyroidism in this country.

Patients with multinodular goiters have one or more affected nodules within the thyroid gland, causing enlargement. This condition is often detected during physical examination. During the early stages of this disorder, many small nodules may be present, but the gland itself may not yet be enlarged. 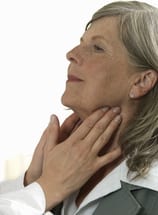 A variety of other causes may result in goiters. Among these are: pregnancy, inflammation, genetic defects, injuries, infections of the thyroid gland, benign or malignant tumors.

Symptoms of a Goiter

In addition to enlargement of thyroid gland, usually visible in the neck, a goiter may result in difficulties breathing or swallowing, coughing, and tightness in the throat. In addition, the patient with a goiter may suffer symptoms of the underlying disease responsible for the gland's enlargement.

Diagnosis of a Goiter

In addition to a physical examination, patients with a goiter will likely undergo tests for thyroid function and blood tests. Depending on the results of these, other diagnostic tests may be ordered, such as a radioactive iodine scan, a thyroid ultrasound, or a fine needle biopsy.

Treatment of a Goiter

When the patient presents with a normal blood level of thyroid hormone, such as is the case with multinodular goiter, no treatment is required. Nonetheless, patients are advised to keep having their condition monitored since their risk of developing thyroid disease is greater than that of the general population. If the gland is enlarged to the degree that it constricts air passages, surgical removal may be necessary.

For other thyroid conditions underlying the development of a goiter, hormone replacement, radiation, or surgery may be necessary.